Definition and Nature of the Work, Education and Training Requirements, Getting the Job

Definition and Nature of the Work

Pathologists are biological or medical scientists who study the nature, causes, and effects of disease in plant and animal life. Pathology is a broad field that concentrates on the changes in organs, tissues, and cells that are caused by disease.

Pathologists work in hospitals, medical laboratories, schools, colleges, and universities. They may teach or do laboratory work or research. They are employed by government agencies associated with agriculture, public health, law enforcement, and many other fields. Private companies that make products such as drugs and insecticides also employ pathologists. 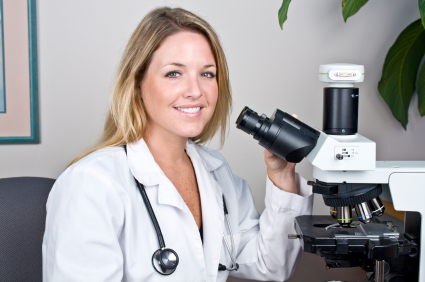 Pathologists concentrate on plant, animal, or human pathology. Although the areas of study of these pathologists are very different, they are all scientists who study disease. Pathology has been called the bridge between basic science and medicine. Pathologists who are concerned with human disease are usually physicians who have received specialized training in pathology. They are sometimes called medical pathologists or are classified according to their subspecialty, such as oral pathology.

Although medical pathologists do not treat patients of their own, they do laboratory tests to diagnose disease in the patients of other physicians. They perform tests on body tissues, secretions, and other specimens to see whether a disease is present and to determine its stage. They evaluate the extent of the disease, estimate the course it is likely to take, and suggest ways to treat the disease. Surgeons may consult pathologists if they find unexpected problems during an operation. Pathologists often stand by during surgery to test specimens taken from a tumor in a patient's body. The patient may remain under anesthesia until the pathologist can evaluate the specimens. Based on the pathologist's expert advice, the surgeon is able to complete the operation in the way best suited to the patient's condition.

Pathologists also do postmortem examinations to determine the cause of death when the cause is unclear. They can evaluate the extent to which treatment had helped a patient. Pathologists' reports help physicians in their care of other patients with similar conditions. Sometimes pathologists serve as medical examiners or coroner's consultants. They determine the cause of death in accidents, poisonings, and suspected murders. Pathologists coordinate and supervise the work of medical laboratory technologists or technicians who prepare specimens or may perform the more routine laboratory tests themselves. Pathologists often specialize in one field, such as hematology (the study of the blood), blood banking, neuropathology (diseases of the nervous system), forensic (or legal) pathology, medical chemistry, medical microbiology, or radioisotopic pathology.

Medical pathologists frequently teach students in schools and colleges that train nurses, physicians, medical laboratory technologists, technicians, and other health care workers. They sometimes conduct seminars for physicians and interns in hospitals. They help train law enforcement officers to use scientific methods of observation when they investigate injuries or deaths. Pathologists also do scientific research into drugs and disease. Laboratories developing new drugs need pathologists to study their safety. Pathologists use microscopes, radioisotopes, and other equipment to study the cause of disease. They also use scientific methods and computerized data as they test theories about disease processes. Cancer, atherosclerosis, allergies, and birth defects are among the many diseases being studied by medical pathologists.

Animal pathologists may be veterinarians or zoologists (animal scientists). Veterinarians specializing in pathology study diseases and disorders in animals. They often specialize in poultry, livestock, or pets. They also help to improve the quality of livestock and poultry used for human food. In addition, their work helps to save human lives since animals can transmit diseases such as rabies and tuberculosis to human beings. Similar to veterinarians and medical pathologists, zoologists specializing in pathology may study the effects of disease, parasites, and insects on the cells, tissues, and organs of animals. Unlike other pathologists, zoologists are often trained to work with a wide variety of animal species. They may study hereditary diseases or disorders in fruit flies in order to increase knowledge about the ways diseases are passed on over a period of many generations. They may study the development of tumors in mice to get clues about the causes and development of cancer in human beings. Animal pathologists often use equipment and methods that are similar to those used by medical pathologists. Zoologists and veterinarians working in animal pathology are employed by colleges and universities, centers for veterinary medicine, zoos, and wildlife refuges as well as government agencies and private industry.

Plant pathologists are botanists (plant scientists) whose special field is sometimes called phytopathology. Sometimes plant pathologists do basic research into the nature of disease in living things. For example, they may study the effect of air pollution on the respiration rate and on the cells and tissues of plants. This study may have applications for medical pathologists who are concerned with the role of industrial pollution in causing lung cancer or emphysema in human beings. On the other hand, many plant pathologists do research that directly relates to plant diseases. They devise ways to control or prevent plant diseases. They help to develop new types of plants that are disease resistant. Their work is useful in improving our food, fiber, and lumber supplies and in preserving the ornamental plants and trees that make our environment more healthful and attractive. Plant pathologists use many of the same kinds of laboratory equipment and scientific methods that medical and animal pathologists use. Plant pathologists teach and do research in colleges and universities. They work for government agencies and private firms involved in agriculture, horticulture, forestry, and related fields.

You need advanced training to become a pathologist. As an undergraduate, you should major in premedical studies, a biological science, chemistry, or a related field. Although individuals with bachelor's degrees can find some jobs as medical laboratory technologists or advanced biological technicians, their opportunities for advancement are limited. People who have earned a master's degree in plant or animal pathology or in microbiology, biochemistry, or a related field may be qualified for some jobs in teaching or applied research. It generally takes four years to earn a bachelor's degree and another one or two years to obtain a master's degree.

To be a fully qualified pathologist you need a doctoral degree (Ph.D.). If you want to work with plant diseases, you should obtain a doctoral degree in plant pathology or a related field in botany. If you prefer to work in animal science, you can get a doctoral degree in zoology or pathology or the degree of doctor of veterinary medicine (D.V.M. or V.M.D.). You will need to spend about four additional years in advanced training after you have graduated from a four-year college.

The professors and placement service at your university or medical school are the best sources of information for finding a job in pathology. Openings for pathologists are often listed in professional journals. The conventions of the major pathology associations often have job notice boards and are good places for making job contacts. You can also apply directly to private firms, medical centers, colleges and universities, or government agencies that hire pathologists.

Pathologists are highly trained professionals who usually advance by improving their skills and becoming experts in their field. They can also advance to become full professors in colleges or universities or directors of research or administrators at universities, medical centers, government agencies, or private companies. Pathologists in the medical field can advance to a position as head of the pathology department in a large hospital. They can also start their own diagnostic laboratories or become consultants to private industry.

Opportunities for those with bachelor's or master's degrees in pathology are expected to be better than the opportunities for those with doctoral degrees. Jobs will be plentiful in private industry, large hospitals, and medical centers. As a result of increased public interest in preserving the environment, expanding food supplies, and improving health care, private companies are expected to devote funds to research in pathology. There will be a great number of positions in sales, marketing, and research management.

Because pathology is a broad field, working conditions vary. However, most pathologists spend some time in scientific or medical research laboratories that are usually well equipped. Depending on their field, pathologists may also spend time in greenhouses, on farms, in hospital wards, or in morgues. Pathologists often work at least part of the time in offices and classrooms. The basic workweek may be forty hours long. Hours are flexible, however, and often total more than forty hours a week. Although pathologists may have to work rotating shifts, their hours are usually more regular than those of physicians who have their own practices.

Pathologists of all kinds are likely to spend time planning projects, attending meetings, and studying the findings of other scientists. They should have the ability to absorb a great deal of information and the patience to complete lengthy research projects. They must be careful and precise workers, especially when their diagnosis is crucial in setting the direction of patient care. Pathologists should be able to work alone, but they also need to cooperate with other members of a medical or scientific team. Pathologists must be able to express their ideas well orally and in writing.

Where to Go for More Information