Definition and Nature of the Work, Education and Training Requirements, Getting the Job

Definition and Nature of the Work

Aerospace engineers design, develop, and test aircraft, missiles, and space vehicles and oversee their production. They often specialize in one kind of vehicle, such as passenger planes, helicopters, or rockets. In some cases, they also work with earthbound vehicles, such as deep-diving vessels that are used to do research in the oceans and high-speed trains that float above their tracks. Aerospace engineering includes aeronautical engineering, which is limited to aircraft, and astronautical engineering, which is limited to spacecraft. 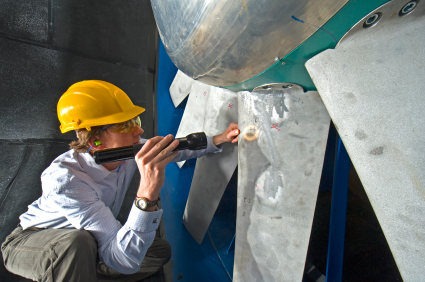 Most aerospace engineers work in the aircraft industry. This industry includes companies that make engines, communications systems, electronic devices, and the many other parts used in aircraft. Some aerospace engineers work for government agencies, such as the Department of Defense or the National Aeronautics and Space Administration (NASA). Many also work for companies that are under government contract to produce equipment needed for missiles and spacecraft. Others work for commercial airline companies, research and development organizations, and consulting firms, as well as for colleges and universities.

Aerospace engineers work closely with other specialists. Scientists such as physicists or metallurgists do the research needed to create new materials. They study how the materials will react in certain conditions, such as the intense heat or speeds encountered in space travel. Aerospace engineers then use the research to develop designs. They test the designs and make changes before beginning Aerospace engineering includes astronautics, which is the science concerned with travel beyond the earth's atmosphere to the moon and other planets. production of the equipment. They also supervise drafters and engineering technicians.

Aerospace engineering is a broad field. Its general area of concern overlaps with areas of other engineering fields, including mechanical, chemical, and electrical. There are also several areas of specialization within the field. Some aerospace engineers concentrate on structures and specialize in the design of new frameworks. They test the framework's ability to withstand heat, pressure, and other forms of stress in wind tunnels. This helps to develop strong and durable aircraft and other vehicles.

Other aerospace engineers work chiefly on guidance and control systems. These systems include automatic navigation equipment for submarines and the automated Instrumentation Landing Systems (ILS) for aircraft, which allow aircraft to land at night and in bad weather. Other special fields in aerospace engineering include propulsion, fluid mechanics, thermodynamics, celestial mechanics, and acoustics. In addition, some aerospace engineers specialize in one phase of a process during which new equipment is developed, produced, and distributed. For example, they may concentrate on design, production, or sales. Others may specialize in a particular type of aerospace product, such as commercial aircraft, military fighter jets, helicopters, spacecraft, or missiles and rockets. They may become experts in aerodynamics, thermodynamics, celestial mechanics, propulsion, acoustics, or guidance and control systems.

All states require licensing for engineers whose work affects life, health, or property, or for those who offer their services to the public. To become licensed as a professional engineer, you need a degree from an accredited school, four years of experience as an engineer, and a passing grade on a state examination. Some jobs in the aerospace industry require security clearance before you can start work.

If you are interested in working for private industry, you should contact aircraft manufacturers, commercial airlines, and companies that make aerospace parts and tools. If you are interested in space travel, you can contact NASA for job information. For most government jobs you need to apply through a civil service agency. You can also apply directly to universities, consulting firms, and research and development organizations. The placement office at your engineering college can also give you advice on finding a job. In some cases, openings for aerospace engineers are listed in newspaper classifieds and job banks on the Internet. Professional engineering journals are another good place to look for job information.

Aerospace engineers who have the needed experience and education can advance to positions as managers or administrators. Some become sales engineers or college teachers. A few start their own engineering firms.

Aerospace engineers work under a variety of conditions—from quiet laboratories and offices to noisy airfields and manufacturing plants. They usually work at least forty hours a week. They may be required to work long hours to complete a project on time. When a project is completed, engineers sometimes must move to a new location to find a job using their special skills.

Aerospace engineers generally work in teams and share information and ideas. They need to work well with others and be able to communicate their ideas. Engineers are problem solvers and should enjoy facing the challenge of a difficult problem. They must be patient and creative and able to pay close attention to the details of their work.

Where to Go for More Information